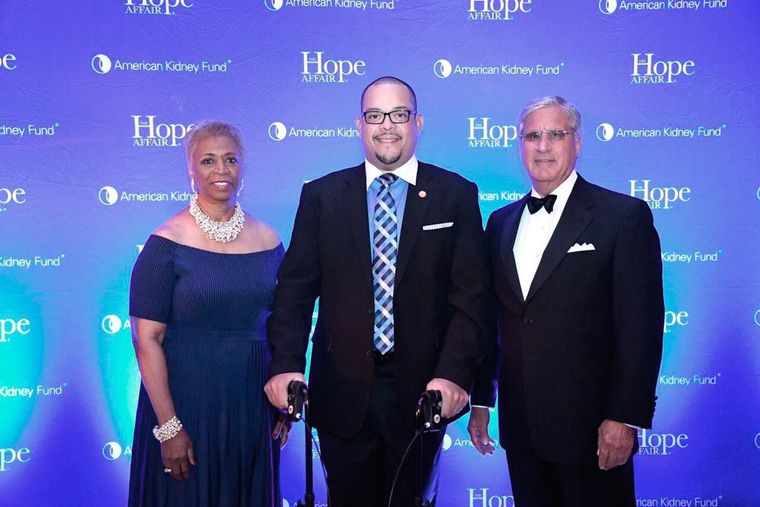 Luis Matos lost complete function of both kidneys at 25. His time as a football player, coach and organization manager seemed finished.

Although his situation looked dire, Matos continued to help others in and out of his Ozone Park home. Taking the trip to visit his football team and manage their needs were all but a portion of a typical day. But Matos’ health forced him to focus on other ways to help his team like answering phone calls from players looking for guidance and finding ways to provide financial support.

Recently, he was named a Hero of Hope by the American Kidney Fund, for all of his efforts helping young adults labeled at risk.

“I’m being acknowledged for the work I’ve done till this point, but for me it’s only a starting point,” said Matos in a phone interview. “I see myself on a broader scale doing much more — taking this wave I’m riding of momentum right now and taking it elsewhere to create a larger wave, or open up other doors. I’m not done. I’m far from it, in fact I’m just beginning.”

The Hero of Hope award is given by the American Kidney Fund to one person annually dealing with kidney failure and contributing to a community, according to Senior Director of Communications Alice Andor.

“It was clear to us from the nomination his wife, Luz, sent us, and our subsequent conversation with him, that Luis is a man with a mission whose impact has already made a difference in a great many lives,” Andor said in an email. “Despite the many challenges of living with kidney failure, Luis continued coaching until his body simply would not let him do so any longer.”

Matos, 39, founded a minor-league football team called the Hawkeyes in New Jersey and partnered with the Major League Football organization, which allows adults between the ages of 18 and 23 to participate in a community-driven team. This partnership spurred Matos’ move to get the medical help he needed and continue his passion of helping others.

“It was all basically blood, sweat and tears by me and my staff, my general manager, coaches, and even certain players who went beyond the call of duty,” said Matos. “I sacrificed a lot of time, money, and even sacrificed my matrimony to make it work.” Luz is currently Matos’ wife.

The personal benefit of helping at-risk young adults for Matos comes from a long-standing passion with football and volunteer work. Matos balanced his time before coaching between school, work and football.

Matos graduated from the class of 2012 from York College with a bachelors degree in business administration and later graduated in 2015 with a masters from the Keller Graduate School of Management at DeVry University. He also played for a semi pro minor league football team called the Brooklyn Seminoles and worked at a foster care agency.

“Minor league football for many people who are in it is more of a hobby and I looked at it more as an opportunity to make more for your community,” Matos said.

It was in 2005 that Matos’ life would change from being an active athlete to a familiar face to doctors and nurses. He was diagnosed with a rare neurological disorder know as chronic inflammatory demyelinating polyneuropathy — a disease that forces the body’s nerves to inflame and ultimately stop vital organs from functioning without treatment.

“It hit me like a ton of bricks,” Matos recalled. “All I’ve been doing is fighting as much as I could honestly; it hasn’t been easy. I’m just glad that God has given me the strength that he has because if I was less of a man, I wouldn’t be here today.”

Matos had to adjust to receiving dialysis three times a week for possibly his entire life. He underwent multiple procedures and visited many doctors to determine the cause of his illness. In one instance, he had to undergo physical therapy to learn how to walk again.

“Knowing Luis, he has taken on a different role as his sickness progressed,” said CEO of Major League Football Dexter Girven in an email. “Luis would give his last to a stranger. Over the years he encouraged me without saying a word, just his actions, and his fight made me appreciate him even more and I am proud to know him.”

Recent signs of heart complications were found in doctor visits according to Matos, but he stays optimistic overall.