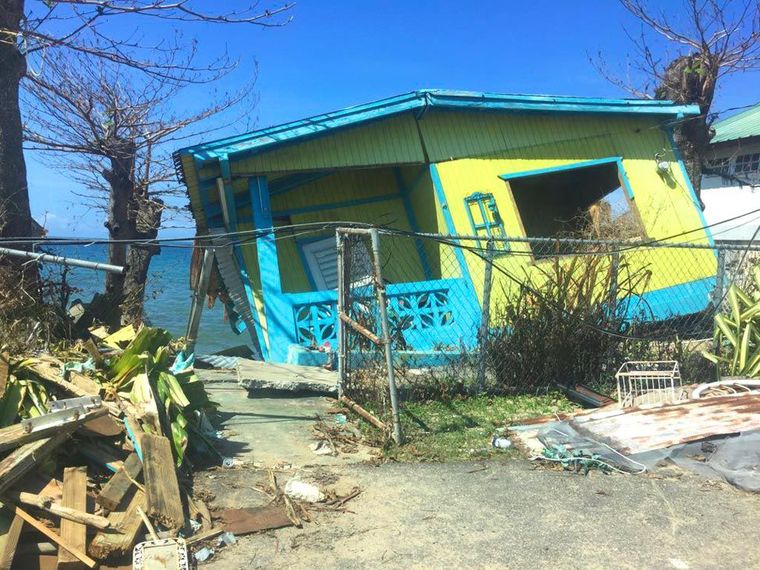 On Oct. 11, at 9 a.m, Jose Medina boarded a one-way flight to Puerto Rico. Three bags were carried across the terminal to the JetBlue check-in entrance. Two of them had tools, batteries and two large packets of beef jerky. His carry-on bag contained all the clothes he thought he needed to wear in the Caribbean heat.

Medina went outside the John F. Kennedy International Airport drop-off area for a final cigar and thought about his travels to his home out in Puerto Rico. His plan seemed simple. Help out family members who needed help, assess the damages done to the family house and help the community recuperate. He choked back tears as he said goodbye to his wife, Elizabeth, and his son, the writer of this story, and walked onto the TSA baggage check line. After going through the metal detectors and given the all clear, he raised two hands in the air to wave goodbye.

When Hurricane Maria landed in Puerto Rico as a category 4 storm on Sept. 20, residents were devastated. The New York Times reported that 84 percent of the island initially didn’t have power and about 43 people were killed. Homeless shelters now hold over 6,000 people left without a roof or bed. About 37 percent of residents still don’t have running water and 16 percent don’t have power running through their homes.

Carmen Yul’n Cruz, the mayor of San Juan, requested U.S. aid immediately and emphasized their need of food and water. President Trump’s response to the mayor’s plea for help was partly a comment on how far the U.S. budget would be thrown off and how Cruz represented “poor leadership.” Trump lashed out on Twitter towards Cruz and criticized residents of the island by mentioning their reliance on government aid.

Medina wasn’t the type to stand around and do nothing when people needed help. So when Hurricane Maria hit and news outlets reported on the disaster, he needed to travel. He said Puerto Rico was calling him. The anxiety of waiting and preparing for the unknown hit home, and he would enjoy the luxuries of running water and cold drinks as long as he could.

The scheduled date for his flight to Puerto Rico was Oct. 3. Just over a week after the storm landed no in-depth news coverage was available. Only by pure chance, Elizabeth was able to connect with family and let them know when to pick up Medina at Rafael Hernandez Airport. His family and friends were all uncertain and concerned about how Medina would survive. But then his flight was postponed to Oct. 18.

A trip to a BJ’s at Gateway Center in Brooklyn the weekend of Oct. 2, was the one time Medina and Elizabeth would spend buying the right materials to bring with him. The costs of supporting the trip, family in Puerto Rico and sending packages added up and there would need to be a spending cap. Medina soon realized after the store trip that his bank accounts were being stripped for a home an ocean away.

The week of Oct. 1 he went around the neighborhood and asked neighbors and local stores to fill the box with as much as they could. Sardines, crackers, beans and other items soon filled the boxes. By the time the Medina family had 15 boxes filled with food, they received a phone call from Anna Ramos, wife to Medina’s uncle, Jose Seda, asking to send water because they didn’t have enough to drink.

More than 35 boxes were sent to the family in Rincon; only half had been received half two weeks after their departure.

The late evening of Saturday Oct. 8, friends and relatives grew concerned on Medina’s departure and questioned the steps he would take once landed in Puerto Rico. He wasn’t renting a car and only taking $300 in cash. The plan he explained to his oldest son Jonathan, and his youngest Anthony, involved a series of money being pulled from an annuity and filing with the Federal Emergency Management Agency for damages. With that said, Elizabeth and Anthony would manage the home in Ozone Park.

News of a possible second canceled flight hit Medina hard, but thanks to Elizabeth’s efforts and the help of a JetBlue official in charge of scheduling flights, a phone call on Oct. 10, allowed him to secure a seat on Oct. 11.

The day Medina arrived early morning in Rafael Hernandez Airport on Oct. 13, he was met by his uncle. The flight was relatively empty considering how many organizations were being sent there. Through the window of a car, Medina saw the island in a dimmer light than he had ever seen before.

He saw something different than what he’s accustomed to on the drive to his home in Barrero “La Mancha” Rincon. After Hurricane Maria landed, and the storm past the town, all of the green that filled the house’s hillside was turned into a brown mush of fallen trees and plant life. The island looked dark and an overall sense of loss hit the hearts of residents and family.

Medina said it’s worse than what he first expected only one day after landing on the island and assessing the damages dealt to the family’s home. The second floor roof was torn with the missing wood found scattered. All furniture on the first floor was damaged by the flooding and the new flooring put in just last year would have to be discarded.

The Medina family in Puerto Rico was safe during the storm with some damage to their homes, but the battle to obtain the necessities like food and water continued. Efforts of aid from FEMA weren’t seen for at least a week after the disaster and local grocery stores were running dry. Ice cost $6 a bag and gas prices soared. One man selling gas not too far from the station wanted $15 per gallon. Fortunately, undercover agents from the FEMA arrested him for selling at such a high price.

Downed power and telephone lines blocked roads and spilled into homes. The first night Medina spent in Rincon, a shroud of black filled the house, and navigation around the first floor became impossible.

Medina’s trip into town on Oct. 13 revealed the mass confusion that riddled Rincon. Post office workers were spread thin and not all the packages sent to the town were being delivered for unknown reasons. On Oct. 18, seven more boxes arrived but not with the emergency water pouches Medina had sent.

While Medina walked the town streets with his uncle, he noticed the mayor’s office in Rincon was riddled with signs asking the mayor to show support and to help the town. Other towns in the area have held dinners for residents but Rincon hadn’t had anything like that.

Medina began to grasp some sense of support when he noticed water running, although inconsistently, and electricians repairing nearby power lines. Elizabeth, Anthony and Jonathan collected a few more goods to send to Medina through the mail with military-grade glow sticks, heavy-duty LED flashlights and candles to help him navigate at night. Medina said he encountered a pack of hungry dogs one afternoon the week of Oct. 16, and encouraged the family to send a utility knife.

In regard to food ration lines and relief packages, Medina would stand in line Oct. 18 for the second time since his departure. He watched as residents threw away the MRE packets — short for meals ready to eat — given by the military. After reading the instructions on the first packets given to his family, Medina figured out how the heating bag system worked. But watching as the packets for breakfast, lunch, and dinner were being thrown away made him question if the government was doing enough to help. He thought some people might not know how to operate the bags and since the instructions are in English, some may not be able to understand.

Medina took the trip back to his home with the help of a local man with enough gas in his car. Without a car or gas, most people must travel miles on foot. He instructed his family on how to use the packets, because he’s fluent in English and Spanish. The lack of organization from town officials has resulted in only certain residents knowing when rationed goods are being distributed.

One of the more frustrating situations occurred later that day, when flyers and announcements were spread around town to file for FEMA relief and where to receive rations. This was the first time in three weeks that Medina heard news being spread about the rations. His other encounters with other rationing points occurred only through word of mouth.

With no connection to the internet or phone lines, filing for government aid was nearly impossible. The disconnect between what FEMA wanted residents to do online against what they had access to was a frustrating contradiction. Medina was fortunate to have family he could alert to file online in New York, but those who didn’t have connections on the U.S. mainland would have to wait until internet is restored.

The situation is dire, with health being a concern. There is no say how long Medina will last and when his family will be able to buy a ticket for him to return to New York. He took the day on Oct. 19 to clean the mess of trees knocked over his back yard. All of the mango trees and exotic flowers were ripped out and the yard turned into a plain of dirt. After all of the manual labor, Medina, like many others on Puerto Rico who suffer without the necessities, would do anything for a cold glass of water.