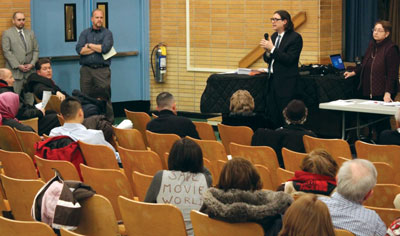 Representatives from Lowe’s asked Community Board 11 to approve a variance for its Douglaston store and heard concerns from local residents regarding the proposal on Monday night during the board’s monthly meeting.

Photo by Anthony Medina
CB11 discusses the variance for the Lowe’s in Douglaston Plaza.

Lowe’s would only be able to fit its store into the Douglaston Plaza shopping center on 61st Avenue through the renovation of a vacant Macy’s and the repurposing of a longtime movie theater—MovieWorld.

Residents who live near the Douglaston Plaza shopping center said that they disapproved of the plan during Monday night’s meeting. They cited Lowe’s early opening hours and unmonitored truck traffic as a possible negative impact on their quality of life.

One major topic of concern was the closure of MovieWorld. Workers at the theater and moviegoers said that they want the theater to stay at the site, despite the efforts of Lowe’s representatives to ensure a smooth transition.

Jasmine Frankel, an employee at MovieWorld for more than 14 years, spoke at the meeting directly to homeowners and the
Lowe’s representatives to plead her case against the theater takeover.

More than 1,400 signatures were collected from residents in Douglaston and other northeast Queens neighborhoods to protest the Movie- World buyout, according to Frankel. She said that the lack of empathy from the Lowe’s representatives would tarnish the cherished theater’s history. Cheaper movie tickets and collaborations with schools on field trips will be two of the amenities that depart with the theater.

MovieWorld’s owner did not want to get involved in the public discussion, but was encouraged to speak at the meeting by board members and the support shown by longtime customers.

CB 11 board members voted 18-12 to approve a Board of Standards and Appeals variance, but on the condition that Lowe’s will work with the city’s Department of Transportation to enforce truck traffic rules in the surrounding plaza roads.