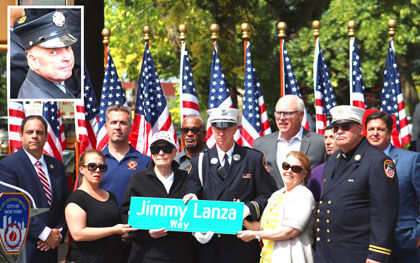 It wasn’t an easy task to keep up with James Lanza when he was on the job with the FDNY’s Ladder 43/Engine 53 in Spanish Harlem, known as “El Barrio’s Bravest.”

According to his close friend and former co-worker Kurt Lester, Lanza was the last guy to sit down at the end of a hard day’s work — and one of the first to respond on the tragic morning of Sept. 11, 2001.

Lanza would quickly leave his home and respond to what was left of the World Trade Center towers, as family and friends account.

In the midst of chaos and destruction, Lanza and fellow firefighters would complete the successful evacuation of 16 trapped civilians and firefighters who were in the North Tower as the building collapsed. “The Miracle of Stairwell B” was one of the very few positive stories stemming from that day of horrors, and today can be recalled to salute the many firefighters like James Lanza who responded.

Those in attendance Saturday at 54th Street and 31st Avenue in Woodside witnessed the dedication of Jimmy Lanza Way in honor of the late firefighter, Vietnam veteran and community activist.

“Jimmy was a man who dedicated his life to helping others,” said City Councilman Costa Constantinides (D-Astoria) at the ceremony. “We are proud we can offer this small offer of gratitude to Jimmy. (D-Astoria). A real hero.”

Saturday’s memorial took place five months after Lanza’s death in April and two days before the 16th anniversary of 9/11.

Family and friends in the crowd heard numerous stories from all who were fortunate to meet Lanza.

“Jimmy Lanza was such an incredible person,” said U.S. Rep. Joe Crowley (D-Queens, Bronx). “He wasn’t much on formality. He was a hero long before 9/11. He was a hero before Vietnam. He had that hero gene in him.”

Crowley recalled working together withLanza to improve the Woodside community.

“I appreciated everything about him,” the congressman said. “Whenever I was in Jimmy’s presence, even if he was giving me some guff I didn’t mind. I could take it from Jimmy because I knew he walked the walk.”

Also among those who attended the Saturday afternoon street naming were firefighters from El Barrio’s Bravest, along with those from Engines 58 and 59, also serving in Upper Manhattan.

“We all know where he’d be today if he were around. He’d be in Texas. He’d be in Florida.”

FDNY Deputy Chief Tom McKavanagh spoke of Lanza’s 28 years as an active firefighter. He mentioned the placement of 32 more names on the wall at FDNY headquarters with members who still suffer from the aftermath of 9/11.

“Knowing Jimmy, he would be embarrassed by all of this fanfare,” McKavanagh said. “He was really not a man who looked for accolades. He would shy away from words like hero. When I think of Jimmy Lanza, and I knew him personally from having been a chief in the Third Division, which covered Manhattan where he worked, he was a humble man. He was a selfless man. That’s what I got from someone like Jimmy Lanza. He was a role model. He was a hero in the firehouse. A man of action.”

Lanza’s services outside the FDNY included volunteer work for the Wounded Warriors Project and helping other veterans in need of assistance. Alan Feuer, commander of American Legion Post 1836, attended the Saturday service with fellow members to acknowledge Lanza’s time as a Navy serviceman in Vietnam.

“Jimmy was one of the most influential voices to help make Boulevard Gardens what it is today,” Feuer said. “As a war time Navy veteran and past commander of Post 1836, New York firefighter, and a Wounded Warriors volunteer, Jimmy exemplifies what it means to be an American veteran.”

Lanza’s family members expressed their support and gratitude to members of the FDNY, Constantinides and all who attended the street naming.

“Everybody knows who I am here,” said Lanza’s niece, Stephanie Pennachio, speaking for the family. “Whenever I’m here they say, ‘You’re Jimmy’s niece. This is what I have to say about Jimmy. We love Jimmy and this is what he did for me.’ They’d sit me down on the park square bench and told me exactly what Jimmy did for them” Pennachio said as she held back tears.

She later mentioned how Lanza’s grandparents would be enthusiastic about the street renaming and the impact of Lanza’s uncle attending the event.

“If he was here he would be honored, of course, but he was a humble person,” said Lanza’s sister, Marian Pennachio.

Another part of Lanza’s experiences in New York City, not mentioned by any of the speakers, included his work as a steamfitter after his time in the Navy and before becoming a firefighter, according to his sister. He helped build the World Trade Center with his father for several years, says Pennachio.

“A true American hero” is what Pennachio still calls her brother.

She wouldn’t say exactly how he would react to the street renaming, but was still confident her brother would be very humbled.