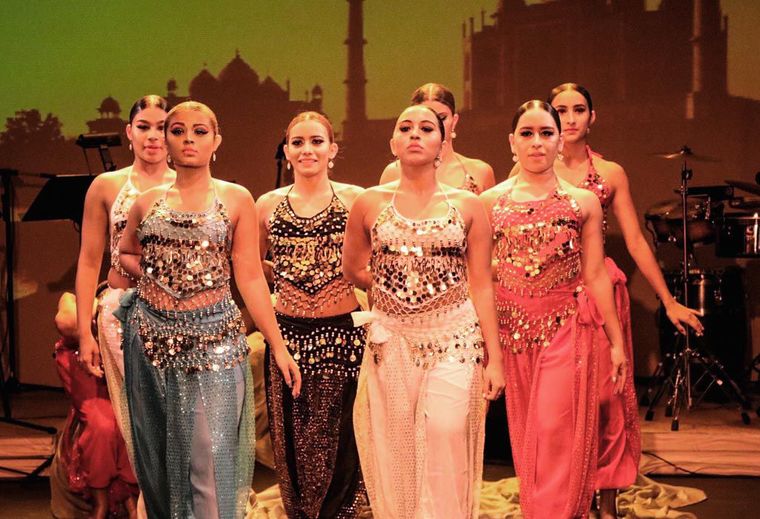 Performers with thin white fabric over their bodies gather center stage. The lights are still dim and all the audience hears is the jingling of costume accessories. The house knows the first performance is on a Middle Eastern theme, but has no idea about the acrobatic moves and Bollywood-inspired dance about to take place.

The music begins to play and the performers move to the rhythm of Middle Eastern beats. The female dancers move at a delicate pace, still covered from head to toe. All eyes in the room are trying to focus on the disappearing bodies to just catch a glimpse at the young dancers’ faces. Then, their bodies are unsheathed and the cultural voyage across the globe begins.

The decision to start the Dances of the World performance in Bollywood style at the Thalia Spanish Theatre in Sunnyside is a daring move executed perfectly by the Colombian dance troupe Cali Salsa Pal’ Mundo.

The venue is featuring Dances of the World (Bailes del Mundo) until Nov. 26. Thalia is the only bilingual Hispanic performing arts center in the area, offering shows in English and Spanish for over 40 years. It’s won 204 awards for artistic excellence that decorate the walls of the theater’s entrance.

Among the nearly two dozen other pieces in Dances of the World are ones telling the story of apartheid and a long history of Caribbean music. From Africa to Salsa NY, each performance projected a different theme onto the stage with the help of dramatic lighting and digital effects.

A screen that stood behind the live band reflected images that accompanied each song’s theme, such as shackled hands and cityscapes.

The acrobatic stunts executed by pairs of performers took the audience by surprise. They timed every move precisely and in unison. Each performer held his or her own weight as both male and female dancers were spun, flipped and tossed into the air.

Sael Nunez, one of the performers from Elmhurst, says the group practiced the performance six hours a week for about a month. Nunez says every part of the performance was his favorite and his most inspiring outfit was his all-black uniform with sparkling blue shoes.

What brought the night together was the live band performing behind the center stage. They played flawlessly as 23 songs, including “Mentiroso,” for a merengue, and “Echale Salsita,” in the Cuban style called son, enveloped the theater through the hour-and-a-half performance.

“The audience loves it because we play a lot of Latin American music. So people recognize immediately where the music is coming from initially,” singer Yaremis Felix said. She’s a part of the Puerto Rican traveling theater troupe and trusts the Thalia Theatre, knowing its history with the Latino/Hispanic cultural alliance she’s a part of.

“Sometimes we have people shouting ‘Hey, Viva Peru!’ when we play ‘Toro Mata’ or of course singing along to ‘Colombia Tierra Querida.’ I hope they feel like dancing at the end of the show.”

Producer Angel Gil Orrios wanted to emphasize the importance of the Dances of the World show as a celebration of diversity in New York and recognition of Hispanic culture.

“There are 22 Spanish-speaking countries and in New York there are immigrants from all of those countries,” Orrios said. “So even if you are a Hispanic or not it’s an opportunity to see what really makes it common in all of us in terms of culture.”