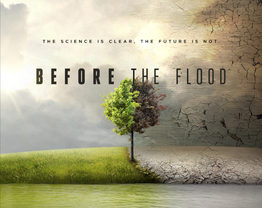 A gas pipeline ruptures in Alabama spilling 338,000 gallons of fuel on Sept. 9 and Gov. Chris Christie raises the New Jersey state gas tax by 23 cents a gallon on Nov. 1. AccuWeather predicts this winter’s temperature will reach a high 40 to 20 degrees. Snowfall already at levels of above 30 inches makes its way to upstate New York.

These recent changes in the earth are reasons why Fisher Stevens directed the documentary Before the Flood. This documentary follows the efforts of Award-winning actor and U.N. messenger of peace on Climate Change, Leonardo DiCaprio, to better understand the totality of atmospheric damage done throughout the world.

The National Geographic network produced the documentary and aired it on YouTube for public consumption on Oct. 30. Leonardo DiCaprio begins narrating the film with a brief biography of his father’s work as an underground comic book writer. He recalls a piece of art, The Garden of Earthly Delights, by Hieronymus Bosch, that hung above his crib as a child. He believes this artwork represents our possible future. Almost 500 years ago, a compilation of biblical stories and depictions of a polluted world in darkness reflects what might come to life without clean energy.

When the U.N. named Dicaprio the messenger of peace on climate change, Secretary General Ban Ki Moon spoke briefly on the need for alternative energy such as solar panels and larger windmill production.

Controversy over Dicaprio’s rise as a UN representative didn’t go unnoticed in the media. A Fox news broadcaster claimed his representation is like “Jeffrey Dahmer being an incredible voice for stew.” The reference to Jeffrey Dahmer comes from his disturbing murder case of dismembering seventeen people and cooking some of their bodies in his home. Those who ridiculed DiCaprio ultimately compared him to a murderous and pedophilic degenerate who died serving a life sentence in prison.

Through this new documentary he interviews Secretary of State John Kerry and President Barack Obama for insight on what the government can do to stabilize the earth’s atmosphere and the hardships of working with a highly conservative House of Representatives.

In between DiCaprio’s journey, he worked on acting in The Revenant, an Oscar award winning film directed by Alejandro González Iñárritu. Learning more about the damage done, he mentions the dodo bird, passenger pigeon, quahog, the Mona, and Tasmanian tiger all examples of extinct creatures caused by human interference.

Interviews with a native fisherman on Baffin Island in the Canadian Arctic reveals that blue healthy fishing ice isn’t present and a soft ice-cream-like-snow covers the land.  Professor Jason E Box, a climatologist with the Geological Survey of Denmark and Greenland, predicts that in 2040 there will be palm trees on Baffin Island.

Box also predicts that if the climate stays at the current temperature, Greenland will no longer exists. The loss of Greenland would mean a rise in sea levels, higher tides in the ocean, and a loss of habitable islands. Box says a one-degree variation in the earth’s temperature is likely to change the ecosystem as we know it.

Dr. Michael E. Mann, distinguished professor of Atmospheric Science, at Penn State, claims that 97 percent of climate scientists agree climate change is real. Mann is better known for his work in climate change and his controversial “hockey stick” graph showing temperature patterns in the past, present, and possible future.

Death threats and letters to Mann’s home incited fear for people not advocating the climate change issue. James Inhofe, a republican U.S. senator representing Oklahoma for 22 years, is one of the most vocal climate change deniers according to Mann. Followers of Inhofe often believed in his idea “Man can’t change climate.” Although, most of his wealth has come from fossil fuels (coal, fuel oil or natural gas, formed from the remains of dead plants and animals) through the process of tapping into the earth and cutting down trees. This is harmful to the planet and makes his accusations seem subjective, according to Mann.

Before the Flood brings the public an alternative method of energy. Efforts that could make a long lasting difference to our future. This could lead to environmentally friendly tactics such as the creation of clean energy factories and a “carbon tax.”

Elon Musk, CEO of Spacex and Tesla, talked about their Gigafactory working on efficient and affordable clean energy. 100 factories would provide enough clean energy for the world, according to Musk.

“The Gigafactory, when it’s complete, will have the largest footprint of any building in the world,” says Musk. “Counting multiple levels that can be as much as 15 million square feet. The thing that really is going to make the difference is if companies that are much bigger than Tesla do the same thing.”

The ultimate method of effectively changing the economy, mentioned by many activists, is the apparent need of an implication of a carbon tax.

Gregory Mankiw, Professor of Economics at Harvard University, said the implementation of a carbon tax will encourage people to decrease their carbon footprint.

“Well a carbon tax would be basically a tax on any type of activity that puts carbon into the atmosphere,” says Mankiw. “So when you tax something and raise the price, people tend to purchase less of it.” A former Chair to the Council of Economic Advisors during the George W. Bush Presidency, Mankiw said this tax could be useful to all. “What a carbon tax does is nudge people in the right direction. A carbon tax will also shift taxes and possibly take less off of payroll taxes.”

The overall effects of climate change are a serious issue. In the film, DiCaprio addresses the U.N. after his travels around the world to learn more of the state of earth.

“After 21 years of debates and conferences, it is time to declare no more talk,” said Dicaprio at his U.N. speech in April of this year. “No more excuses. No more 10-year studies, no more allowing the fossil fuel companies to manipulate and dictate the science and policies that affect our future.”