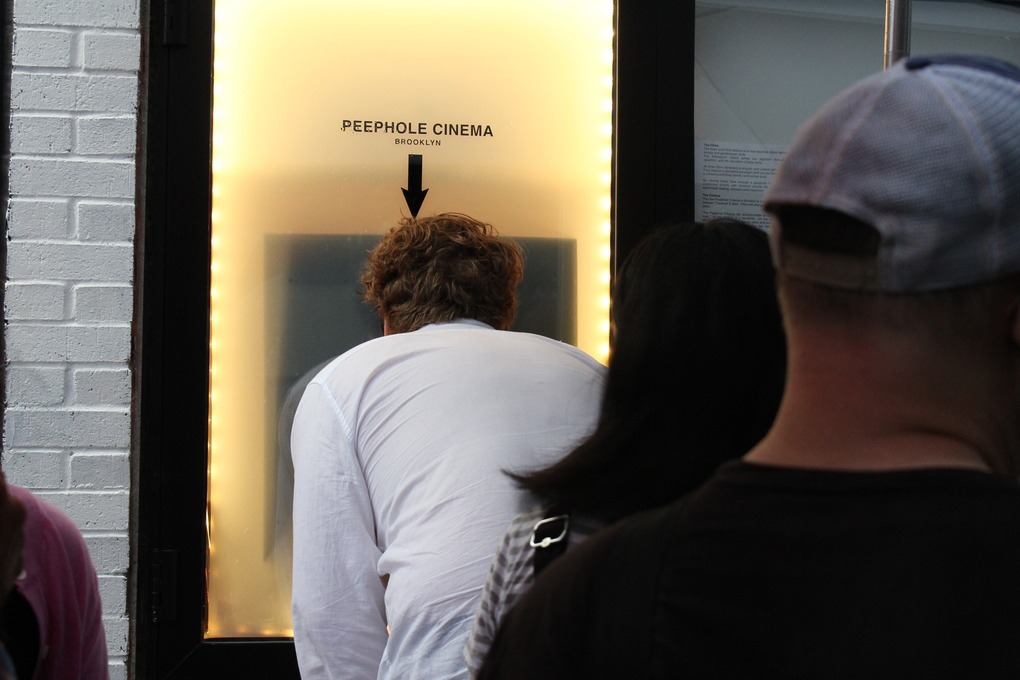 The opening of Peephole Cinema’s latest screening Relocated was a sidewalk attraction for those daring enough to peer into the black looking glass last Friday.

A line formed in front of the peephole on 97 Wilson Avenue with associates, friends and former students of the cinema’s curator Lauren O’Brien.

“This project, I think because it’s a peephole, there’s a lot of conceptual tension about privacy, attention span and being voguer,”O’Brien said. “Maybe you’re not supposed to look [in a peephole], but also what influences me is making neighborhoods more special.”

O’Brien calls herself an “institution graffiti artist” with the free short film screenings and a 24/7 viewing experience. She’s lived in Bushwick for almost seven years and often works in her studio behind the cinema.

“Peepholes are really made to be for security so that they protect people who are inside and this really transforms that so it’s actually the opposite. You’re switching the inside and the outside,” O’Brien said.

Relocated is a look at how NYC artists can manipulate the female body to express thoughts on sexuality and gender using multimedia and photography.

The three featured artists for this particular instillation are Sam Cannon, Carrie Hawks and Martina Menegon.

“One thing I really love about film is that you can share it with a lot of people and this is more secretive and a little clandestine and I like that aspect of it,”Hawks said.

Hawks’ work Swarm uses cut out arms from magazines and other personal works to create a moving collage. The various arms shift in a pink and white backsplash that allows the viewer to focus on the arm movement. The original original work provided sound to the piece but Hawks says being featured at Peephole Cinema brings out the work’s abstractions.

Cannon’s project becomes personal by using her own body to create moving images. One of the works displayed Legs on Pedestal is a combination of legs on top of a white pedestal using digital tools in a show of the female figure.

“Usually people experience my work online on their phones so they’re used to seeing it on a small screen and because I work primarily in short form video so this is a great place to showcase that because your not asking people for too much of their time,” Cannon said.

Spider, another one of Cannon’s shorts, has the artist turn into the insect using a set of mirrors and her body. Her style is similar to animated gifs where Cannon takes a still image and makes the photo look alive.

“I was really interested in the way that women’s bodies are usually manipulated and I found the way they are generally manipulated to be really boring,”Cannon said. “There are arguments around the fact that it’s not ethical, but for me it makes it not that interesting and I don’t really care if someone tucks their waist in or makes their breast a little bit larger so if I’m going to change someone’s body– change it in a way that’s at least noticeable and interesting.”

Martina Menegon also utilizes her figure in Splits are Parted. Her body is rendered in 3D and clones of her laid out on a black background glitching in and out of sight.

Several of O’Brien’s students from the Rochester Institute of Technology came to show their support.

“I think professors that are still active in the field set an example for students because it’s important to know besides being our professors, they’re trying to pursue what they’re teaching us,” said Maridelis Morales, a photographer and a former student of O’Brien’s.

“Whenever I came down this way I never knew this was here so I thought it was such a great surprise because I totally get the concept of zoning into a video and being comforted in that little space,” said Amanda Finocchio, a friend of O’Brien’s who helped during the opening.

The future of Peephole Cinemas is a collaboration with the IS 349 School of Math, Science and Technology to create “experimental animation workshops.” Mr. Aviles, an art teacher at the highschool will work closely with O’Brien.

She also plans on teaching people between the ages of 12-18 to create short films similar to those at the Peephole Cinemas. Free stop motion workshops and short filmmaking courses are also in the works. Email O’Brien at info@peepholecinema.com for more information.

The last day to view Relocated is Friday, August 31st.